One of the definite UPs of Pilsner´s Theaterfestival was its vigorous demonstration that theatre in the region is fully engaged with issues that are central to the human condition. 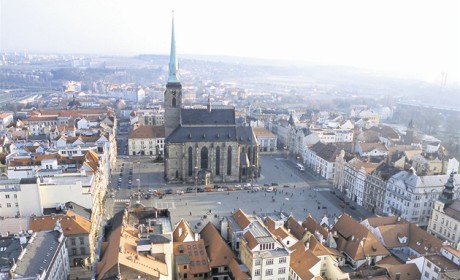 Although what I saw was often brilliantly theatrical and wonderfully entertaining, virtually nothing could be classified as diversionary, entertainment theatre (which has its own valid function). Virtually everything I saw prodded me, provoked me, made me examine assumptions, left me energized and thoughtful and somehow changed — everything you hope will happen when you step inside a theatre.

Clearly, play-makers in the region pay their artform the great compliment of thinking constantly about how to make it in new ways — ways that reflect the expressive potential of theatre today and make its universal themes relevant for modern audiences. The five days of the festival felt like being inside a little volcano of creative ferment, with sparks of imaginative force flying off in all directions. 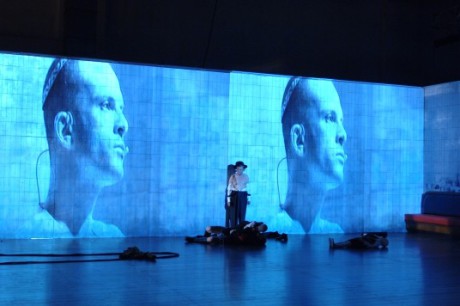 (A)pollonia, Warlikowski’s celebrated and complex staging of his dissection of notions of killing and sacrifice, seen through the lens of classic tragedy and modern Polish history. The production, presented in a vast warehouse on a shifting stage of multiple sets, crystallized what I saw as one of the main themes of the festival, the inexplicability of man’s inhumanity to man. It presented no simple answers to the great questions it posed, nor could it—nor should it. Theatre asks difficult questions.

It’s up to us as individuals to think our way to the answers—as Berlin’s An Enemy of the People makes us do. This production, another of my UPs, is a stroke of pure theatrical genius: director Ostermeier updates a conventional issue-based Ibsen play to modern times, then breaks down the fourth wall and brings in the voice of the live modern audience to comment on the questions of moral conduct that lie at the heart of the play. 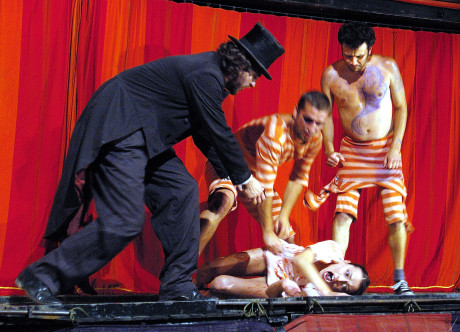 In the circus, of course, there is no fourth wall to begin with, and Teatro Tatro’s Master and Margarita (another UP) is a riotously involving treatment (you could even have your picture taken with Stalin), so magnificently buffo that you almost forget you are being fed some solidly serious thoughts about good and evil.

Good and evil was at the heart, too, of the imaginative but over-lengthy staging of The Bat – who gets to say when a life should end?—and the eternal challenge of living the fulfilled and decent life that animated both The Tempest (a wonderfully economical and evocative piece from SKUTR) and Iceland’s Brim (some nicely observed characters but otherwise notable only for its gently swaying ship’s-cabin set).

If one message seemed to be build as the festival moved along, it was that since we don’t learn from history we are pretty much doomed as a race—so let’s make the best of it and party while we can. The idea was expressed in many forms, but perhaps came to a head in The Hedonists, in which a glum group of individuals who seemed imprisoned in an ante-room to death (a beautifully realized two-level set, claustrophobic in its tiny shape) forlornly dance out the minutes they have left until their names are forgotten.

One of the overall UPs was the uniformly high level of imagination brought to set design and costume. Another was the tendency to clever stylization, seen at its finest in Bremen Freedom, where the play’s powerful messages about the two-way play of sexual politics (simple on the surface, shimmeringly complex beneath) were framed in a crisp and precise style that distanced and focused them in a beguiling and effective manner.

Stylization opened The Wedding but was cleverly allowed to disintegrate along with the party as this entertaining production unfolded. And restrictions of style became merely tiresome as Dead Souls (one of my DOWNs) plodded along. 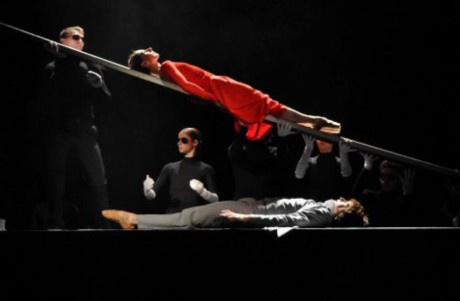 A different form of stylization, repressed and formal, permeated Death in Venice, another of my DOWNs — a ponderous and symbol-laden attempt to evoke the famous romantic tragedy. Its best moments were the visual effects it created by the imaginative use of the New Theatre’s revolving stage.

Eugen Onegin I admired mainly for its poetic qualities, a theatre of reference and subtlety that made the conflicting demands of love and duty poignant, though rarely moving. As for The Kindly Ones, I had hoped it would bring together many of the threads of morality and human behaviour that had excited and provoked me on previous days, but the first act seemed like such a dull and literal (and oddly skewed) staging of the fictional tale that I left after the first half. 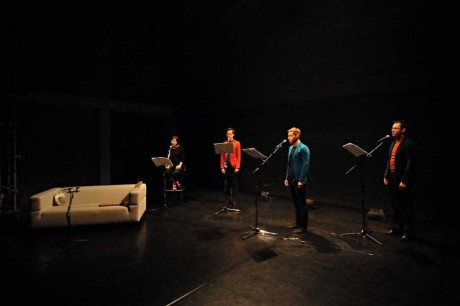 Almost everything I saw had at least one character who bellowed at the top of his voice. In virtually every case the bellowing diminished the effect of what was being said, rather than enhancing it. Less can often be more, as Enemy of the People and the charming and delicate Four Three Two One demonstrated.

I would also, as a non-Czech speaker, put in a request for more legible surtitles. The decision to incorporate them is much appreciated. However, only the German and Polish production designs used them effectively.

Lengths were also sometimes questionable. We could have perhaps been satisfied with one or two fewer Greeks in (A)pollonia; the inspired grotesqueries of Teatro Tatro could profitably have been trimmed; The Bat seemed to have difficulty finding a way to come to an end.

But those are small complaints. The 2015 festival was a rich and provocative adventure in modern theatre and an experience that we will long continue to savour. 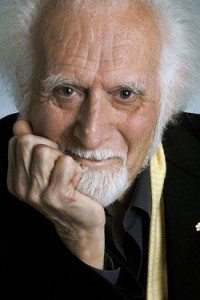 MAX WYMAN is a Vancouver writer and one of Canada’s leading cultural commentators. He wrote theatre and dance criticism for more than three decades for newspapers, magazines and national radio, and has written a number of books on the arts and society. A former member of the board of the Canada Council for the Arts, the country’s principal arts-funding body, he was made an Officer of the Order of Canada, the country’s highest civilian honour, in 2001.