Even though Germany and the Czech Republic are neighbours, I hardly knew anything about Czech theatre. Coming to Pilsen and enjoying the Czech and international stagings offered me a first look into what’s shown and happening within Czech theatre.

The stagings that were offered were diverse and had a wide range. You could see smaller and experimental performances, like Boca Loca Lab’s Four three two one and Jan Frič’s The nice things we experience (which I really just “experienced” since there were hardly any subtitles due to some improvised scenes), as well as quite conventional stagings like Dead souls (Městské divadlo Brno) and performances that were not only different from others but also left a huge impact.

One of my three huge Up‚s of the festival was Warlikowski’s (A)pollonia – an agonic creation or rather composition which left me in a twilight zone. Intense acting, an incredibly huge and impressive scenography and a collage of time, venues, pictures, videos and stories. I could have sat there for another four hours. [4.5*]

Another definite Up was Teatro Tatro‚s The Master and Margarita. Teatro Tatro took the theatre out of its dusty stone walls, put it into a circus tent and created an illusion of a travelling theatre company that soon seemed to be almost real. Old and almost naive theatre tricks were used with such an intelligent and perfect coordination that it was simply fun and pleasurable to observe their disrespect and brisk cockiness. They’re doing a great job making theatre more accessible and open to public. Attitude, a fire-eating tomcat, Stalin and an improvised time machine. I would love to see more of them. [4.5*]

A third Up goes to Skutr’s Tempest: a wonderful, polyglossic and lyrical interpretation of Shakespeare’s play. I loved its contemporary and atmospheric vibes and poetry which were complimented by the actor’s airy presence and closeness. [4*]

Some downs were probably Městské divadlo Brno Dead souls [1.5*] and Slovenské národní divadlo’s The kindly ones [1.5*] due to its conventional staging – both left me without any impact.

Eugene Onegin by Skutr seemed to be a little uninspired – if it wasn’t enough to stage actresses as hysterical teenage girls and their hysterical mothers, Skutr also decided to let an actress play a cat that follows Onegin around while purring and lying on the floor. Don’t know how to comment on this one. [1*] (If Skutr think about staging a cat ever again: please ask for Teatro Tatro’s tomcat – that’s how you play a cat.) 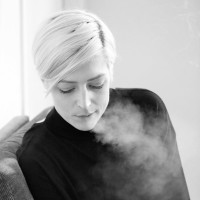