Rolling Stones play rock’n’roll in Cuba’s ‚biggest concert ever‘. The band’s historic performance is about more than just music – it is expected to culturally reinforce the end of one of the world’s last cold war conflicts. 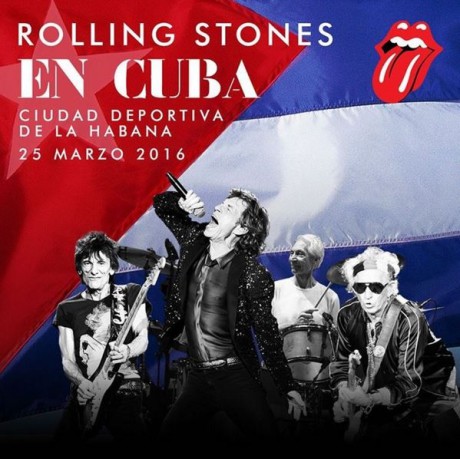 Even before Keith Richards hits the first chord in Havana on Friday night, the Rolling Stones are on course to make musical history with a massive gig that aims to cement socialist Cuba’s opening to the capitalist world.

The free concert by one of the planet’s richest bands is expected to attract more than 200,000 diehard fans and curious spectators to a field outside the Ciudad Deportiva de la Habana baseball stadium for an event that may go on record as the biggest concert ever seen on the island. 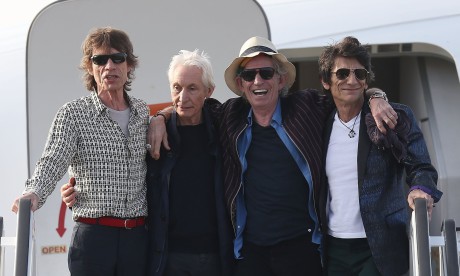 The political significance could be greater still. Coming just days after President Barack Obama’s breakthrough visit and less than half a year after a tour by Pope Francis, the mega-event was expected to culturally reinforce efforts to end one of the planet’s last cold war conflicts.

But the meaning of the concert varied from generation to generation. Many young members of the audience, which began gathering on Thursday, admitted they were not familiar with the repertoire of the elderly British rockers, whose music was considered politically unsound during the early years of the revolutionary government.

Others of a more political, punkish bent expressed disappointment that the Stones had decided to play on the island before democracy was established. But the vast majority, including Cuban rockers and thousands of foreign fans, were simply there to enjoy a show that was expected to set a new benchmark for entertainment, as well as a moment in political and rock history. 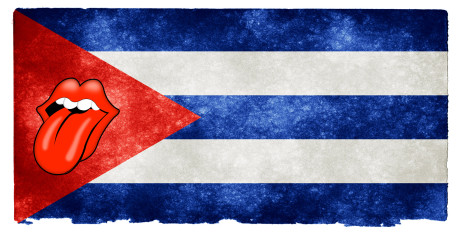 The Rolling Stones released their first album in 1964, just two years after the Cuban missile crisis and the imposition of the US trade embargo. At the time, the United States targeted Havana for potential nuclear annihilation. Unsurprisingly, the Cuban government was less than enthusiastic about music from countries allied to Washington.

The Beatles – and, to a lesser extent, the Stones – were seen as examples of diversionismo ideológico (ideological divergence) and a product of an enemy culture. This did not stop their appeal to many young Cubans. Enrique Plá, an early member of Irakere and arguably Cuba’s best-known rock drummer, told the Guardian he listened to British bands, as well as Elvis Presley and Chubby Checker, despite the hostile atmosphere.

This carried risks. When he and his friends went to parties, they hid records by foreign bands inside the sleeves of Cuban musicians. Even this was not enough caution. Plá was expelled from the National School of Arts in the mid-1960s after the principal saw a newspaper article about his performance in a rock band. He was declared a bad example to other students and forbidden from joining an orchestra. 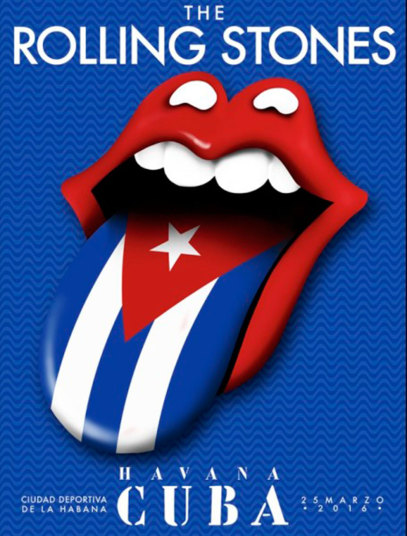 The shift came later. Very little rock music was played on the radio and TV until John Lennon released the politically driven Power to the People, which was approved by the Cuba government and heralded a change that continues to this day. (Lennon now has a park named after him in Havana complete with a statue on a bench).

It was so closed, but now it is incredible how much it has changed, said Plá. By coming here, the Rolling Stones concert here will take that to another level. It will be a masterclass for all the musicians, artists and people of Cuba. I think the Rolling Stones will also learn something. They may have their differences, but they will feel glad they stayed together long enough to play in Cuba. Of course, money is a factor. But it’s not the most important thing. Here, they will just feel happy.”

Putting on such a huge event in such a location was a diplomatic as well as a logistical challenge. 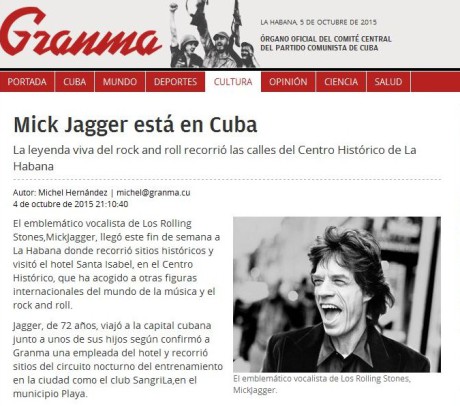 Getting this concert together has been a massive enterprise, said Tim Cole, the British ambassador in Havana who helped to facilitate contacts with the Cuban government. The Stones’ team have negotiated all the permissions, brought in everything they need, including the stage, in 56 sea containers and in just a few weeks built the whole thing. That’s impressive in a country where foreign businessmen can sometimes take years to get up and running. But it shows you can get things done and bodes well for the future.

The band appear to have been inspired by the thought of making history like Pink Floyd and David Bowie at the Berlin wall or Wham in China in 1985. To help organise the concert, they called on the help of timba star Isaac Degado. 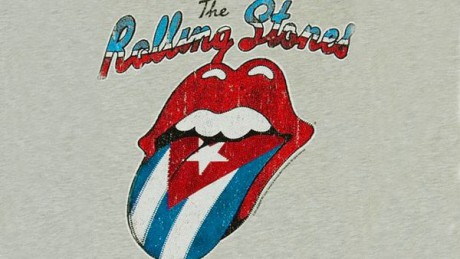 Funding was the next problem. With average salaries of about $20 a month, the vast majority of Cubans are unable to afford even a cut-price ticket, let alone the usual sky-high fees for a Stones gig. The answer was to stage a free concert, a throwback to the band’s reputation-making gigs at the end of the 1960s.

Since that rebellious era, the Rolling Stones have become a byword for the establishment. Mick Jagger has a knighthood, the band have ramped up a fortune said to be in excess of £200m and have mastered – according to Richards – the art of avoiding tax in seven countries. In Cuba, they have managed to put on a free concert thanks to the sponsorship of Gregory Elias, a 62-year-old entrepreneur from Curaçao.

On their website, the band acknowledged the support of their financial backer while looking forward to a spectacular concert. We have performed in many special places during our long career but this show in Havana is going to be a landmark event for us, they said.

For many in a nation of music lovers and players, the excitement has been building for weeks. I get very emotional thinking about it. It’s like a dream. I never imagined I would see this day, said Luis Manuel Molina, one of the country’s most influential rock musicians. It will undoubtedly be the biggest concert ever in Cuba. I’m convinced it will also be the best. Cubans will finally get to see a real show.

Two hours before the start, a good natured crowd was steadily filling the expanse in front of the stage. I love it. This is my generation. I have to come. We’re here to make history, said Tania Livia, one of a growing number of Cubans who have started up a private business in recent years.

Younger Cubans were mostly unable to name a Stones song, but many seemed thrilled just to soak up the atmosphere. This is so exciting. The biggest event of my life. When I’m old I’m going to tell my grandchildren I was here, beamed 19-year-old student Karina Eguiluz. 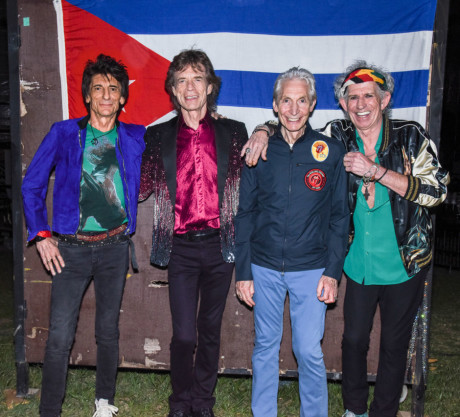 Others saw it is an opportunity to experience a spectacle that has rarely – if ever – been seen in Cuba. Security guard Judy Rosales said she normally preferred salsa to rock but she hitchhiked ninety minutes to see the concert. I don’t have the money to go to another country to see a show like this. It’s a unique opportunity, she said. I want to see the special effects up close. It will be much better than on television.

Not everyone is satisfied. Gorki Águila, the lead singer of punk band Porno para Ricardo, says he would like to attend the gig, but he is not sure if authorities will allow it. Águila is treated as a political threat, and there is usually a police car outside his house. He was not allowed to leave during earlier visits to Cuba by Pope Francis and the US secretary of state, John Kerry. I’ve lost count of how many times they have arrested me, he told the Guardian in an interview at his apartment. Águila’s band rose to international notoriety in 2002 with a song aimed at former president Fidel Castro that contains ambiguous lyrics that the singer translates as: Don’t eat so much cock comandante. Although he is a fan of the Stones, he feels the British rockers are being used. If I could speak to them, I would tell them they are disrespecting the rights of artists in this country who are not able to express ourselves, he said. The tyrants here are trying to portray an image of Cuba as an island of happy people. If the Rolling Stones don’t talk about what is going on here [in terms of human rights violations], then they are indirectly serving as collaborators with the Cuban tyranny. Even so, he can’t resist the urge to see them. The Rolling Stones are very, very important artists. Like Elvis Presley they took black music to the masses. I like them. If I can go, I will. 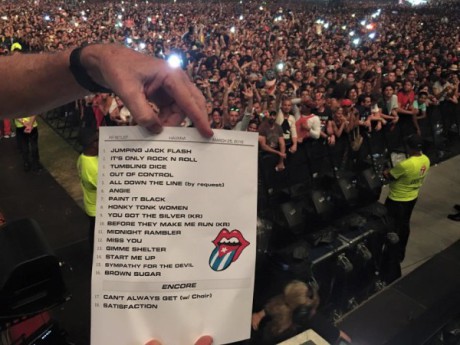 All Down the Line

You Got the Silver

Before They Make Me Run

Sympathy for the Devil

Encores: You Can’t Always Get What You Want. (I Can’t Get No) Satisfaction 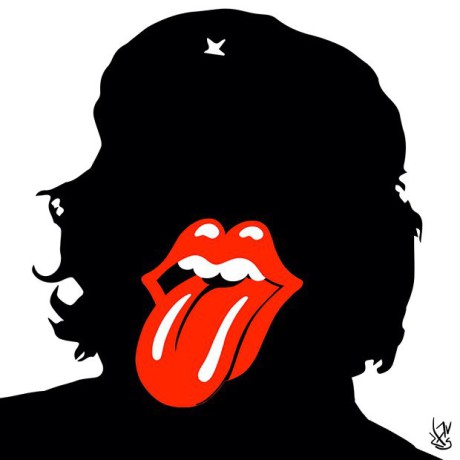