The 2012 Olivier Awards with MasterCard ceremony has come to a close with the Royal Shakespeare Company’s hit show Matilda The Musical the biggest winner of the night, taking home a huge seven awards. 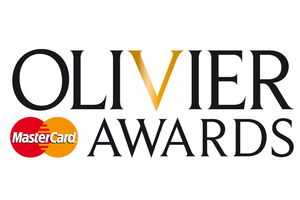 The acclaimed cast were not left empty handed with an Olivier Award record-breaking win for the four Matildas who share 2012’s Best Actress in a Musical Olivier Award, becoming the youngest ever recipients of an Olivier Award. Bertie Carvel, who plays their fearsome headmistress, was named Best Actor. 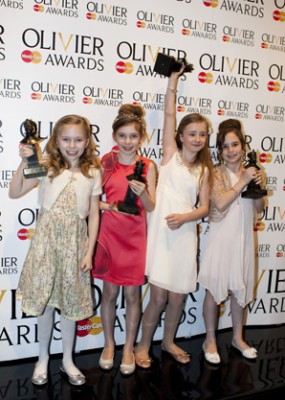 Held at the Royal Opera House and presented by Sweeney Todd co-stars Michael Ball and Imelda Staunton, tonight’s star-studded ceremony and celebration of the best of London theatre has given many of London’s most-lauded venues and famed stars a reason to celebrate.

The Regent’s Park Open Air theatre triumphed with Crazy For You collecting not only Best Costume Design (Peter McKintosh) but also Best Musical Revival, marking the third time in as many years the alfresco venue has been awarded the accolade.

The much-decorated National Theatre’s award success continued this year following seven wins in 2011. While it didn’t match this number at tonight’s ceremony, the Southbank venue succeeded in three categories including the Best Actor Olivier Award, which was shared by Benedict Cumberbatch and Jonny Lee Miller for their high profile roles in Frankenstein, and the MasterCard Best New Play which saw fellow NT nominee One Man, Two Guvnors pipped to the post by John Hodge’s black comedy Collaborators.

It was also a good night for London’s intimate Donmar Warehouse with Anna Christie taking home two awards; Best Revival and Best Actress, which saw Ruth Wilson accept her second Olivier Award after her 2010 win for another Donmar hit, A Streetcar Named Desire.

The 2012 Olivier Awards saw Sheridan Smith too triumph for a second time. After her 2011 Best Actress in a Musical win, this year the prestigious awards recognised her work in drama Flare Path, with Smith winning Best Performance in a Supporting Role.

In the opera and dance categories it was a hugely successful night for the English National Opera who won both Best New Opera for Castor And Pollux and the Outstanding Achievement in Opera Olivier Award, recognised for its entire exceptional season. The Royal Opera House was recognised with Royal Ballet principal dancer Edward Watson winning the Outstanding Achievement in Dance Olivier Award, while Sadler’s Wells took home Best New Dance Production for the acclaimed DESH.

In other categories, Derren Brown was awarded his second Olivier Award, winning in the Best Entertainment and Family category for Svengali, and Theatre Royal Stratford East took home the Outstanding Achievement in an Affiliate Theatre accolade for Roadkill.

Guests at the star-studded event, along with BBC Red Button and online viewers from across the world, enjoyed exclusive performances tonight from shows including Matilda The Musical and Ghost The Musical, as well as tributes to Special Olivier Award winners Sir Tim Rice and Dame Monica Mason, who were both recognised tonight for their outstanding contribution to theatre and dance.

Join the conversation on Twitter using #oliviers2012 as all the winners and nominees from tonight’s ceremony celebrate a fantastic year for the theatre capital of the world.

The Royal Shakespeare Company’s Matilda The Musical leads this year’s Olivier Awards with MasterCard nominations, recognised in 10 categories, the maximum number of eligible awards for a musical at this year’s awards. 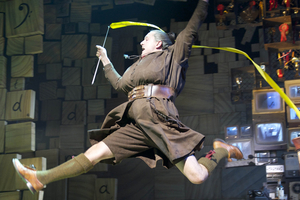 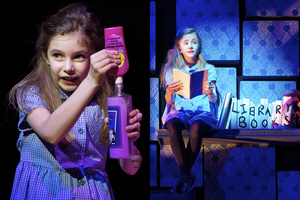 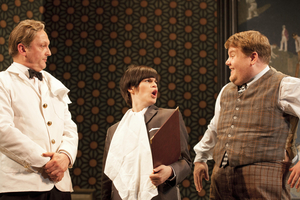 One Man, Two Guvnors, which has already collected a host of awards this season, leads the pack with five nominations including the much coveted MasterCard Best New Play, facing competition from fellow NT show Collaborators, the Royal Court’s Jumpy and madcap comedy The Ladykillers. The show’s star James Cordon is recognised for his critically acclaimed performance in the Best Actor category.

Cordon faces competition from two other NT stars Benedict Cumberbatch and Jonny Lee Miller who share the nomination for their high profile performances in Frankenstein. They are joined by David Haig for his TMA Award-winning role in The Madness Of George III, Olivier Award-winner Douglas Hodge for Inadmissible Evidence and Jude Law for the Donmar Warehouse’s Anna Christie.

Continuing  2011’s drama success is Trevor Nunn’s centenary celebration production of Terence Rattigan’s Flare Path which, as well as being nominated in the Best Revival alongside Noises Off, Much Ado About Nothing and Anna Christie, sees last year’s Best Actress in a Musical winner Sheridan Smith nominated for Best Performance in a Supporting Role. 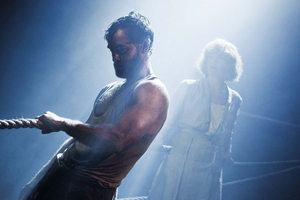 Affiliate theatres are also celebrated at this year’s awards with the Lyric Hammersmith’s production of Mogadishu, Theatre Royal Stratford East’s Roadkill, the Donmar Warehouse’s Salt, Root And Roe at the Trafalgar Studios 2 and the Royal Court theatre’s The Village Bike nominated for the Outstanding Achievement in an Affiliate Theatre Award.

Musical revivals Crazy For You, Singin’ In The Rain, South Pacific and The Wizard Of Oz are also celebrated at this year’s award with the chance of taking home the Best Musical Revival Award.

Other nominated shows this year include Jerusalem and The Children’s Hour (both Best Performance in a Supporting Role), Lend Me A Tenor The Musical (Best Performance in a Supporting Role in a Musical), and Derren Brown: Svengali, Midnight Tango, Potted Potter and The Tiger Who Came To Tea, who are all nominated in the Best Entertainment and Family category.

Mark Rubinstein, President of the Society of London Theatre, described the list of nominees as: truly representative of our diverse world-class London theatre across both the commercial and subsidised sectors, which continue to delight thousands of Londoners and visitors every day.

Paul Trueman, Head of Marketing UK and Ireland for MasterCard Worldwide, said the company were proud to enter into the second year of our partnership with the Society of London Theatre and the Olivier Awards. We are delighted to extend our congratulations to the nominees of the MasterCard Best New Play Award.

The most prestigious award’s ceremony in London’s Theatreland will take place at the Royal Opera House on 15 April. Theatregoers can follow full coverage of the event on www.olivierawards.com, by watching live on the BBC Red Button, listening to BBC Radio 2, or attending the Covent Garden Piazza event where the public can enjoy performances from some of London favourite shows and watch all the action unfold live on a big screen relay.

Best New Play:
Collaborators at the Cottesloe theatre – Winner
Jumpy at the Jerwood Theatre Downstairs at the Royal Court
The Ladykillers at the Gielgud theatre
One Man, Two Guvnors at the Lyttelton theatre

Best Actor
James Corden for One Man, Two Guvnors at the Lyttelton theatre
Benedict Cumberbatch and Jonny Lee Miller for Frankenstein at the Olivier theatre – Winners
David Haig for The Madness of George III at the Apollo theatre
Douglas Hodge for Inadmissible Evidence at the Donmar Warehouse
Jude Law for Anna Christie at the Donmar Warehouse

Best Performance in a Supporting Role
Mark Addy for Collaborators at the Cottesloe theatre
Oliver Chris for One Man, Two Guvnors at the Lyttelton theatre
Johnny Flynn for Jerusalem at the Apollo theatre
Bryony Hannah for The Children’s Hour at the Harold Pinter theatre
Sheridan Smith for Flare Path at the Theatre Royal Haymarket – Winner

Best Director
Sean Foley for The Ladykillers at the Gielgud theatre
Nicholas Hytner for One Man, Two Guvnors at the Lyttelton theatre
Rufus Norris for London Road at the Cottesloe theatre
Matthew Warchus for Matilda The Musical at the Cambridge theatre – Winner

Outstanding Achievement in an Affiliate Theatre
Royal Exchange Theatre, Manchester for Mogadishu at the Lyric Hammersmith
Theatre Royal Stratford East in association with the Barbican and Traverse Theatre for Roadkill – Winner
Donmar Warehouse for Salt, Root And Roe at the Trafalgar Studios 2
The Royal Court for The Village Bike at the Jerwood Theatre Upstairs

Outstanding Achievement in Opera
ENO for the breadth and diversity of its artistic programme – Winner
Amanda Holden for her translation of Castor And Pollux at the London Coliseum
Richard Jones for his direction of Anna Nicole and  Il Trittico at the Royal Opera House and The Tales Of Hoffmann at the London Coliseum
Mark-Anthony Turnage for his composition of Anna Nicole at the Royal Opera House and Twice Through The Heart at Sadler’s Wells.