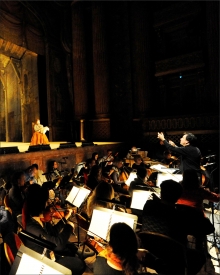 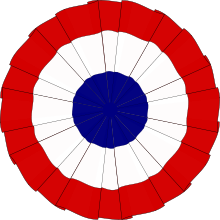 The French Cockade: A Symbol for Nature and Character Development

When Opera Lafayette invited me to direct Opera and the French Revolution where the central theme pivots around three ancient heroines performed by one singer, I was immediately intrigued. Heightened emotions, issues concerning the burden of fate, the fight with predestination and society as well as the potential for powerful visuals that could express three archetypal characters inhabiting one personality in a single dramaturgical line provided me with a compelling and meaningful interpretive challenge that I very much wanted to pursue.

For me, the most important topic is that of the power to fulfill one’s own will, not the will of others. Antigone, Médée, and Sapho are all women who stand against injustice. From a powerless position, they seek ways to fight off their powerlessness. Each of them finds a different answer; each uses a different range of weapons to wage war against corrupt power in a multifaceted society: Antigone fights against the will of Creon; Médée against Jason´s betrayal; and Sapho rallies against being stripped of her high status. Their battles are not led against the whole of society itself, but against the centers of power which render them powerless.

In each of these ancient tragedies there is a strong connection to nature that serves as a conduit to communicating with the Gods. I have decided to use symbols of three natural elements connected with the three colors on a French cockade – white/dust, blue/water, and red/blood.

The white dust comes from the pilgrimage taken on Oedipe’s road as Antigone kicks dirt into the face of an oppressive regime by following her own rules and carrying the burden of his earthbound existence with inner strength and the sense of moral responsibility. Because of her courage she is shown mercy.

Sapho is connected with the water element not only by the tragic act of drowning herself but also through the psychological aspects of wavering, connection with the unconscious and dreams and hypersensitive emotions often typical in highly creative people. 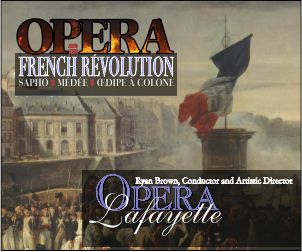 The biggest challenge is to advocate for Médée’s act, but it is not my role to do so: I only try to understand her motivation. She is a self-inflicted victim, a slave of love and passion, a betrayed spouse, discarded lover, separated from her own children, and left with screaming pain inside of her. The red color is, for me, not only the blood on her hands but also the flames that stand as an ultimate punishment for the whole community. Despite her terrifying act, she is revealed to us as immensely powerful in her dark victory. There cannot be a more impactful ending than that of the fire that devours the ruins of a destroyed human.

These three elements also inform the inner development of the character: from sacrificing purity, through artistic melancholy, to ultimate despair. The performer is forced to contain the diverse emotionality of the three different women. In every situation she is challenged to express the different character´s stories in completely unique ways. I want traces of one tragedy to stay on the stage to pervade the next one, to let our heroine learn from past experiences, and to make new decisions with every new piece. Her answers to society are more and more bare and primal. She climbs higher and higher into the state of self-actualized defiance portraying its most extreme expression and does it all with great determination (and not powerlessness).

Classic melodrama is a theater of action and visual images, strongly influenced by period paintings, with heightened emotions and intense heroism created around the topic of moral responsibility. Words describing this genre were “naturel,” “varieté,” and “sentiment.”

In our time we are living our own personal and inner revolutions, fighting for a meaningful life every day. I have changed these essential words to “identity,” “diversity,” and “empathy.” This is what Nathalie Paulin will be fighting for on the stage tonight.